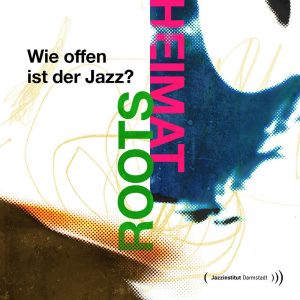 The 17th Darmstadt Jazzforum which will take place from September 30 through October 2, 2021, asks about the sometimes unclear relationship between “roots” and “Heimat”, the loaded German word signifying “home”,  “home country”, “home culture” and much more. Roots stands for the African-American origin of jazz that resonates even in the most advanced experiments of contemporary improvisation. Heimat stands for the fact that jazz in particular always demands a cultural and aesthetic self-localization. For some, jazz is a creative practice used globally, but always pointing back to its African-American origins. For others, jazz is something they grew up with, something that allows them to express their own concerns and individual point of view better than most other genres. For many, jazz is both, containing the African-American tradition just as much as the productive freedom to apply this practice outside of its original community connecedness.

All of that is what we want to talk about. We plan to continue discussions prompted by the Black Lives Matter movement about the idea of “Europe” which had a lasting influence on aesthetics and ethics, the presentation and the reception of jazz. We ask how a possibly Eurocentric perspective has changed and continues to shape our perception of what jazz stands for, how it connects both to the music’s African American origins and to our own individual cultural environment. Our discussions may start with the name “jazz”, we may look at historical examples of Eurocentric tendencies, and we may take into account the current discourse about the relevance of jazz in non-African American communities. We will talk about racism in jazz, reflect on how exclusion and different forms of othering are present in today’s jazz scene, and look at alternate readings of how the example of African American culture has changed and enriched the understanding of music all over the world. We won’t limit the discussion to jazz but also look at similar debates about Eurocentrism or African-Americanism in contemporary composed music or pop culture.

The Darmstadt Jazzforum is an international conference aimed at a more general than just the scholarly community. We expect papers that spur on discussions beyond the limits of jazz research, and we expect an audience of musicians, journalists, dedicated jazz fans as much as students and scholars from different fields.

The Jazzinstitut Darmstadt organizes the Darmstadt Jazzforum with the support of the City of Sciences Darmstadt. In 2021 it is held in co-operation with HoffART-Theater Darmstadt and the Bessunger Knabenschule. The 17th Darmstadt Jazzforum is funded by the Kulturfonds FrankfurtRhein-Main and by the Hessian Ministery for the Sciences and the Arts. It is presented by Jazzthetik – Zeitschrift für Jazz und anderes.

Summery of the program:

How is cultural identity formed and how is its perception influenced?
On the first day of the 17th Darmstadt Jazzforum conference we will ask how cultural identity is expressed in music or how it is perceived or not perceived in music. Philipp Teriete will talk about the educational canon at Historically Black Colleges and Universities in the USA in the late 19th and early 20th century and discuss the influence of this kind of music education on early jazz. Anna-Lisa Malmros discusses the very different identities of Danish-Congolese saxophonist John Tchicai, who has also been identified with the U.S. free jazz scene at least since his participation in some of its most prominent recordings in the 1960s. The following conversation with saxophonist Gabriele Maurer, double bassist Reza Askari, and vocalist Simin Tander [t.b.c.] will also discuss issues of identity, namely present the very personal experiences of artists who have been affected in different ways, by skin color, family background, and/or their artistic engagement with traditions that lie outside their German homeland (moderated by Sophie Emilie Beha). We have titled this panel: “About being a stranger, arriving, yet staying a stranger. Conversation about one’s own experience of identity perception”.

Cultural appropriation and national self-image (case studies)
In the morning session of the second conference day we will talk about the often very personal process of appropriation of African-American music in Europe. Philipp Schmickl will present the example of the Austrian Hans Falb, who met African-American trumpeter Clifford Thornton in Paris in 1978 and then planned concerts for and with Thornton in his hometown in eastern Austria, which eventually resulted in an internationally acclaimed festival. He questions the motivations behind Falb’s curatorial activity and relates them to Thornton’s views on music and politics of the time. Ádám Havas refers to a 2002 statement by Bruce Johnson (“Jazz was not simply ‘invented’ and then exported. It was invented in the process of its own dissemination”) and applies it to the reception of jazz in Hungary, which has been very consciously drawing on cultural practices of Roma musicians living in Hungary. Finally, Niklaus Troxler, whose posters are the subject of a special exhibition at the Jazzinstitut, will talk about his own path to jazz, as a fan, as the founder and longtime organizer of the Willisau Jazz Festival, with which he was able to bring many of the musicians to Switzerland whose music he adored, and as an internationally renowned graphic artist.

“Us” and “the others”
The much-postulated “emancipation” of European jazz in the 1950s and 1960s from U.S. (and thus especially African-American) models often led to an attitude of “we have to do something of our own,” which – mostly unconsciously rather than consciously – led to the perception that jazz produced by European musicians had become something quite different from what was happening in the United States. Harald Kisiedu questions these perceptions, discusses the important Afro-Diasporic contributions to European experimental jazz and the admiration of African-American heroes that has always existed in the jazz scene, as examples for cultural creolization. Timo Vollbrecht has long been active as a saxophonist on the New York music scene, and also tours Germany and Europe with different bands. He has asked fellow musicians about their experiences with “social othering” and the exoticization of their person/art/music and, based on this, discusses possible strategies for each artist to achieve social justice in the music community. Trumpeter Stephan Meinberg asks about how to deal with one’s own privileges as a person perceived as “white” who as a professional, e.g. practicing musician furthermore works mostly with African-American music. In a roundtable with guitarist Jean-Paul Bourelly, concert promoter Kornelia Vossebein and cultural activists Joana Tischkau and Frieder Blume, we will finally discuss what is needed to contribute not only to a change in consciousness, but also to a different representation of musicians on stage (moderator: Sophie Emilie Beha). We have optimistically titled this panel: “Get to work: change reality!!!”

Of folks and people (case studies)
Identity is on the one hand something very personal, but on the other hand it is often perceived differently from the outside than by oneself. This is the subject of the morning session of the third conference day, which collects some very specific, yet quite different examples . Nico Thom talks about Bill Ramsey, the white U.S. American who (in addition to a career in German “Schlager”) was celebrated in the German jazz scene of the 1950s as the “man with the black voice”, discussing aspects of the “Americanization of Europe, in which ‘postwar Western European societies actively participated in Americanization with strategic self-interests and skillful appropriation strategies.'” Focusing on a concert at Deutsches Jazz Festival in 1978, in which saxophonist Heinz Sauer shared the stage with Archie Shepp and George Adams, Peter Kemper examines the developmental of both Shepp’s and Sauer’s musical approaches and asks about aesthetic qualities of jazz that may transcend ethnic, geographical and national identities. Like an introduction to the afternoon session, Vincent Bababoutilabo emphasizes the need for perspectives critical of racism in music education today and in this country (Germany).

How we view the world
Each of us is responsible for our own perspective. Perspectives, however, are not a default, they can be changed. The last afternoon of the Jazzforum is about such changes of perspective. We start the afternoon with a presentation by Berlin-based musicians Sanni Lötzsch and Jo Wespel. They will introduce their concept FESTIVAL BOOST NOW!, which is meant to be a call for self-empowerment of musicians on the one hand and for the creation of “fundamental openness” within all culture communities on the other. Their radical concept demands an approach towards queerfeminist, intersectional, anti-rassist, and interdisciplinary teamwork  within the artistic process, as well as the re-formation of cultural structures. With their “Meta-Community” they not only develop multiperspective event formats, but also create holistic “Realutopien” (real world utopias), as they call it. Saxophonist Luise Volkmann received the Kathrin-Preis awarded by the Jazzinstitut in April 2021, which came with a week-long residency in Darmstadt, during which she conducted research on Sun Ra, the African diaspora, the Black Atlantic, the socio-musical and political influence of music. At the same time, she met for the first time with the musicians of her latest LEONEsauvage band, which will be heard on Friday evening at the Darmstadt Jazzforum, and discussed with them subjects such as the African-American diaspora and how we as Europeans deal with it. In her own contribution and then in conversation with singer-songwriter Ella O’Brien-Coker, Volkmann will discuss aspects of rituality, our many identities and performative speech. In the concluding panel, we ask what influence our own and others’ views have on our dialogue with “the world”. We have invited Constanze Schliebs, who has many years of experience as a booking agent in Germany and abroad and has also been active as a curator and festival founder in China, Sophie-Therese Hueber from the music department of the Goethe-Institut, and Sylvia Freydank from Internationales Musikinstitut Darmstadt (Summer Courses for New Music), institutions where similar discussions have been going on for some time (moderator: Sophie Emilie Beha). And we ask somewhat provocatively, “Do we actually just export music or also our worldview?”